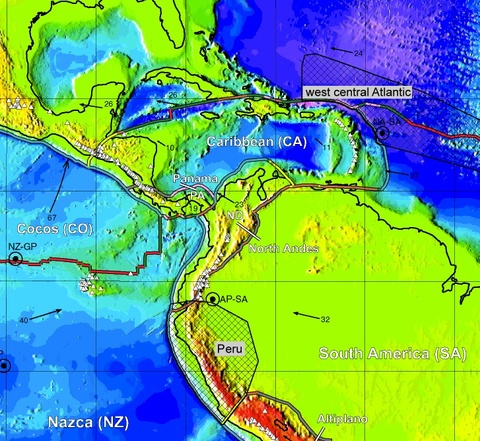 Map of plates in the Caribbean region. Triangles indicate volcanoes. (Bird, 2003)
The North Andean plate contains parts of Ecuador, Colombia, and Venezuela, and naturally includes the northern Andes. (Bird, 2003). The North Andean plate is mostly composed of sedimentary rocks from the Jurassic, Cretaceous, and Paleogene (i.e. spanning from ~199 Ma to 23 Ma) that accumulated through accretion of sediments from the subducting Nazca plate (Ramos, 1999). A study by Cardona et al. (2011) found that there were five distinct tectonic episodes that resulted in the building of the northern Andes region: the collision of northern South America with the Caribbean (70 Ma), subduction related metamorphism and magmatism (65 Ma), the accumulation of a thick siliclastic accretionary wedge (60-58 Ma), arc magmatism (58-50 Ma), and regional uplift (<50 Ma). There is extensive volcanism in the North Andean plate, particularly in Ecuador and Colombia (Stern, 2004). The source of magmatism and volcanism is magma rising off of the partially melting Nazca plate, which then may rise to the surface (Stern, 2004). Venezuela does not host any volcanoes, although it does contain many mud volcanoes (Aslan, 2001). These are the result of dewatering sediments from the subducting Caribbean plate (Reed et al., 1989). This is discussed in more depth on the "Accretionary Wedges" page. 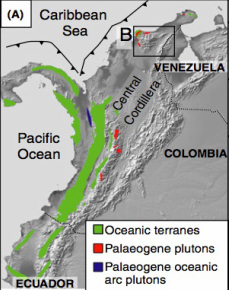 Much like the North Andean plate, the Panama plate is tectonically complex, and has four triple junctions (Bird, 2003). Even as recently as the late 1980s, the boundaries were not known (Adamek et al., 1988). Until 9.5 Ma, the Nazca plate was being subducted underneath of the Panama plate (Van Benthem et al., 2013), at which point it became what is now referred to as the Panama Fracture Zone, a right-lateral strike-slip area (Lowrie et al., 1979). The Panama plate is comprised of igneous rocks as a result of a magmatic arc (Coates et al., 2004). It is also composed of a variety of rocks which formed prior to the collision with the Americas, such as pillow basalts, biogenic carbonates, and cherts (Coates et al., 2004). Following the collision, more rocks were accreted on to the Panama plate, such as coarse grained sediments and turbidite sequences (Coates et al., 2004). Like Ecuador and Colombia, Panama is host to volcanoes, although all three of them are currently dormant (Harmon, 2005). As a result of its current collisions with South America and the Cocos plate, the Panama plate is currently moving northward (Harmon, 2005). Other consequences of this are regional uplift, bending of the plate, and strike-slip faulting within the plate (Harmon, 2005). Although the Panama plate is just a small isthmus, its position between the Americas has had major ramifications on the Earth’s climate. Approximately 3 Ma, the Panama plate closed the gap between North and South America, interrupting the circulation of water between the Pacific and Atlantic oceans (Schmittner et al., 2004). After the closure, the Atlantic ocean became increasingly warm and salty (Schmittner et al., 2004). It is thought that a warmer Atlantic ocean led to a higher moisture content in the Arctic, and thus larger amounts of snowfall (Schmittner et al., 2004). The effects of the closure are discussed in more detail on the "Special Features" page.