Accretionary wedge (USGS)
The Caribbean region has a plethora of convergent plate boundaries, some of which have resulted in a significant presence of accretionary wedges. As one plate subducts beneath another, some of the overlying material is scrapped off the subducting plate, and is juxtaposed against the material of the overlying plate (Saffer et al., 2006). It is in this manner that the accumulation of ocean floor materials such as pelagic sediments, pillowed basalts, and ophiolites occurs (Barber et al., 1989). 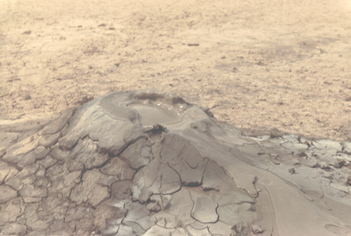 Mud volcano in Venezuela (Wikipedia)
A notable characteristic of accretionary wedges is the “taper angle”. This is the angle between the top of the wedge and the bottom. As the bottom plate is driven beneath the overlying plate, some sediments are scraped off and accumulate, while others are underthrust. As pressure mounts, the high pressure gradient results in a rapid decrease in porosity, from >50% pre-subduction to <15% within 20 km of the trench (Saffer et al., 2006). The result of this decrease in porosity is a dewatering of the subducting sediments (Bray and Karig, 1985). The end result, however, is a net increase in pore pressure, which reduces the effective stress. This allows for the mechanical stability of accretionary wedges which have low taper angles (Saffer et al., 2006). Taper angle is also dependent on other factors, such as the thickness of subducting sediments, plate velocity, and the presence of faults (Saffer et al., 2006). The expelled water may manifest itself as mud volcanoes, which are observed in Venezula, Panama, and Barbados (Aslan et al., 2011; Reed et al., 1989; Martin et al., 1996).

The decrease in porosity also has effects which reach further than the overall taper angle. As the pore fluid is expelled, the sediments lithify and become more competent (Zhao et al., 1986). The sediments which have accumulated at the front of the edge have not been subjected to high pressures, and as a result they have not lithified. They are thus mechanically incompetent, and deform as the plate continues to subduct beneath them. This is the cause of the characteristic convex downwards shape at the front of accretionary wedges (Zhao et al., 1986).

The northern Andes are certainly the most prominent accretionary wedge in the Caribbean region. They formed from 199.6 Ma to 23.02 Ma, as a result of the subducting Nazca plate (Ramos, 1999). As a result of primarily accreting oceanic basement rocks, there are obducted ophiolites, in addition to metamorphic rocks up to the blue schist facies (Ramos, 1999). The specifics of the Northern Andes are discussed on the "Suprasubduction Zone Microplates" page.
The Samana complex in the Dominican Republic is a metamorphic region which records a complex, high pressure accretionary wedge (Escuder-Viruete et al., 2011). This accretionary event was initiated approximately 60 Ma, as a high pressure, low temperature metamorphic accretionary wedge and then switching to a second regime, of decompression and retrograde metamorphism approximately 33 Ma (Escuder-Viruete et al., 2011). There are other similar high pressure accretionary areas on the northern coast of Hispaniola and Cuba, which are the result of a collision with the North American plate (Escuder-Viruete et al., 2013) 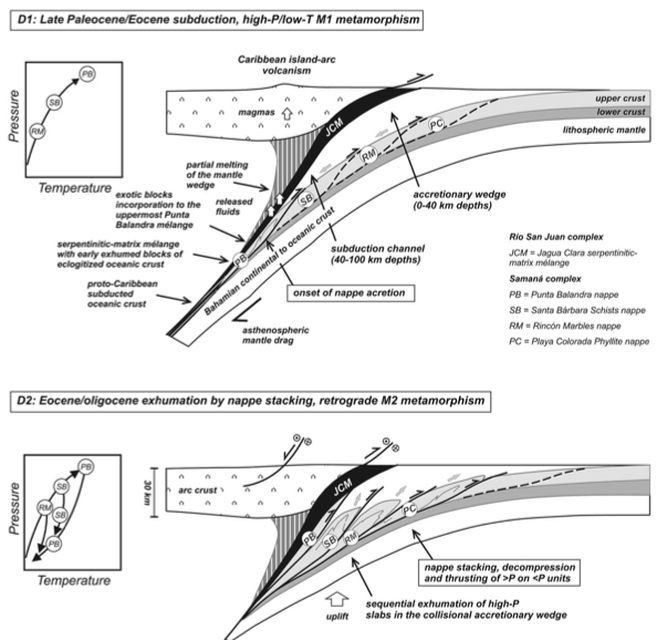 Bray, C. J., and D. E. Karig (1985), Porosity of sediments in accretionary prisms and some implications for dewatering processes. Journal of Geophysical Research, 90. 768–778.