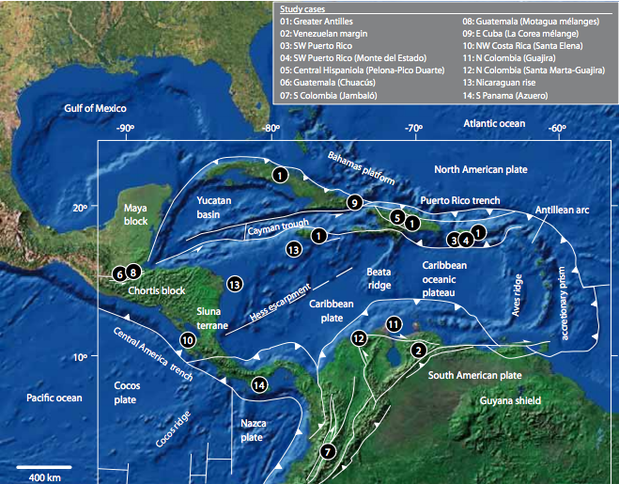 Figure 1: Map of geological features on the Caribbean Plate (García-Casco, Proenza, and Iturralde-Vinent, 2011)
The Caribbean Plate is centered amidst the Cocos, Panama, North Andes, South American, and North American Plates.  Landmasses composing the Caribbean Plate include the majority of North Central America (Figure 1, #6,8,10) and the Greater Antilles (Figure 1, #1), as well as the Lesser Antilles (Figure 1, Antillean arc).  In addition, the northern edge of the Caribbean plate is comprised of multiple microplates.  The composition of rocks varies greatly between the tropical islands (Figure 1, #1,3,4,5,9) and Central America.  The islands are thought to be a continuous volcanic arc chain of calc-alkaline composition (Nelson et al, 2011).  All the Greater Antilles are dated to have initiated volcanic activity in the Early to Late Cretaceous while the Lesser Antilles represent another volcanic event beginning in the Oligocene (Bouysse et al., 1990).  In contrast, the basement rocks composing countries such as Honduras, Nicaragua, and El Salvador, also known as the Chortis block and the Sluna terrane (Figure 1), are phyllitic and graphitic schists containing interlayers of quartzite and metaconglomerates (Mann, 1999).  These metamorphic rocks are poorly dated but are thought to be Paleozoic to possibly Precambrian in age.  Higher stratigraphy includes clastic rocks from the Middle Jurassic to Early Cretaceous, which are overlain by Aptian-Albian shallow marine limestone.  There are also characteristic back-arc basins dated to the Paleogene that are present along most of the volcanic island arc (Mann, 1999).  The basaltic oceanic plateau forming most of the Caribbean Plate is dated to Santonian time, at approximately 90Ma (Kerr and Tarney, 2005).
The motion causing the creation of the Caribbean Plate is thought to have begun in the Cenozoic, but the formation history is still being debated (Bachmann, 2001). Presently, there are strike-slip faults along the North and Southeast boundaries of the Caribbean Plate, allowing eastward movement relative to the North and South American Plates.  In particular, the Northern boundary is left-lateral, while the Southern boundary is right-lateral (Mann, 1999).  This Eastward movement was initiated in the Late Eocene and was firmly established by the Late Oligocene.  The initiation caused the Puerto Rico Trench to be converted to its present role as a transform fault (Malfait and Dinkelman, 1972).  On the western edge of the plate is a continuous subduction zone where the Cocos, Panama, and North Andean Plates are all converging with the Caribbean Plate.  The Cocos Plate is subducting beneath the Caribbean Plate, while the Caribbean Plate is subducting below both the Panama Plate and the North Andean Plate.  This is thought to have started by the Late Eocene when there were multiple trenches combined in a complicated system, causing a continuous subduction zone and widespread volcanism on the Western edge of Central America (Malfait and Dinkelman, 1972).  There is also subduction on the Eastern border as oceanic crust of the South and North American Plates is being subducted beneath the Caribbean (Mann, 1999).  Both underthrusting and strike-slip motion along the Aves Swell in the Late Cretaceous to Early Tertiary represent the onset of the subduction, and the present Lesser Antilles arc represents Eocene to Holocene eastward migration of volcanism (Malfait and Dinkelman, 1972).

Figure 2: Images display a model demonstrating the possible evolution of the Caribbean Plate (Malfait and Dinkelman, 1972)
The Caribbean Plate’s most characteristic feature is the active volcanic arc, the Lesser Antilles, which lies along the eastern boundary of the plate.  It is connected to a wider arc system, including the Aves Ridge (Figure 1), which is a remnant arc, and the Grenada back-arc basin, located between the Aves Ridge and the Lesser Antilles (Bouysse et al., 1990).  The arc is composed of 17 active volcanoes of calc-alkaline composition, caused by subduction of the South American Plate in the Atlantic Ocean under the Caribbean Plate.

Bachmann, Raik. (2001). The Caribbean plate and the question of its formation. Institute of Geology, University of Mining and Technology Freiberg Department of Tectonophysics

García-Casco, A., J. A. Proenza, and Manuel A. Iturralde-Vinent. (2011) "Subduction Zones of the Caribbean: the sedimentary, magmatic, metamorphic and ore-deposit records." Geologica acta: an international earth science journal, 9.3, 217-224.